November 10th was an unseasonally cold Spring day in Melbourne but the crowds still came along to see an eclectic range of vintage and modern writing equipment. There were several raffles and Steve's book "The Swan Pen" was one of the major prizes. Doug and The PENterprise had all the English Pen books on offer with sales made and others expected in the post-Show period. 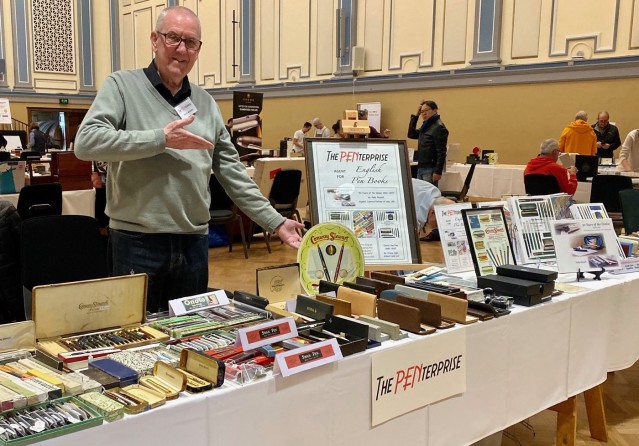 (The PENterprise). He will have sample copies of the books for inspection, along with his eclectic range of pens, pencils and sets for sale. Doug specialises in cataloguing and collecting Conway Stewart sets - he is always ready to look at new treasures! Steve's latest book - The Swan Pen - in a Limited Edition signed by Steve, is one of the star raffle prizes on the day. You can contact Doug at wilsondoug.aus@gmail.com

The Melbourne Pen Show goes from strength to strength, offering a blend of vintage and modern items to suit all enthusiasts. This year's event, on November 10th, has grown by 40% compared with last year's and has had to expand to a second room to accommodate the new exhibitors. Event details are available here: http://www.melbpenshow.com.au/

Proceeds from the Melbourne Pen Show are donated to charities that promote literacy or provide educational support for disadvantaged children.

The general consensus was that this was, again, a super Show, probably with a record number of visitors. Many of the regular dealers were there, along with several new faces. However, in common with many of the other top international shows, there are now more and more dealers trading in 'modern' pens and associated items, with sellers of vintage items probably accounting for less than a third of the space.

There was plenty of interest in Steve's new book with associated positive comments and resulting sales. The Limited Edition version had already sold out before the show, but the standard version proved very popular.

Since 'The Swan Pen' went to press in May, Steve has discovered a few more important Swan pens that were not featured in the book. As with the other English Pen Books titles, we will be adding an 'Updates and New Finds' page to the 'The Swan Pen' (aka TSP) section of the website once the photographs of these are available. Please note that new 'Reviews and Feedback' pages have also been added to the TSP and FYOTD sections.

Unfortunately, Andy was unable to attend this show, though he still hopes to be selling the last few copies of FYOTD (and some pens pictured in the book) at the spring show in 2020.

Steve was showing a proof photocopy of his new book and was taking reservations for the Limited Edition version of 72 numbered, signed and slip-cased copies.

The final files have now gone to the printers and the books, including the standard editions, will be available for sale and/or collection at the London Writing Equipment Show (LWES) on 6th October 2019