Updates to '50 Years of the Dinkie'

As new information becomes available, it has always been my intention to add any updates to the printed book here, so that it continues to reflect the current knowledge.

Masa Sunami (the acknowledged expert in Japanese vintage pens) has contacted me with some further information about the manufacturer of the Lumina Dinkie 570 pens.

He tells me that the Lumina materials were very popular in Japan at that time. He adds that the components for the ballpoint pens (mentioned on page 81) were found at the premises of the Kato Seisakusho Company in Osaka, which also indicates they were likely to have been the original manufacturer of the components for the Dinkie 570 pens and 54 pencils. The company was run by a colourful-sounding character named Kiyoshi Kato, and they are best known for the manufacture of their 'Spaceman' brand pens.

You can read more about the company and the exploits of Kiyoshi Kato in Masa's excellent book 'Fountain Pens of Japan', written with Andreas Lambrou, 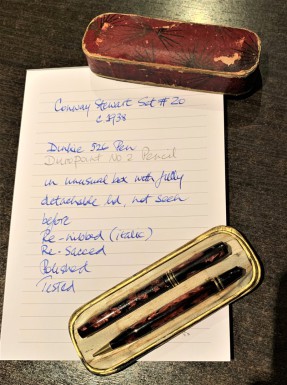 Doug Wilson from Australia is the 'go to guy' when it comes to the history of Conway Stewart box sets. He recently sent me pictures of a previously unknown style of fancy card box for a No 20 set of the mid-late 1930s. This is very unusual for Conway Stewart as the lid is not the familiar hinged lid, but is a 'push-on' style, and it is completely removable. The provenance is good - the colour of the mid-late 1930s Dinkie 526 and Duropoint pencil match the colour of the case beautifully, and to avoid any doubt, there is a No 20 sticker on the underside of the box! It seems almost certain this was a style peculiar to the Australian market. A very few examples of similar style cases for other sets seem to have been recorded, but again, only within Australia.

Conway Stewart enthusiast Bernard Prosser recently discovered the Dinkie 540 pictured below, a rare early example of the blue candle flame casein material. Given the metal ring fitment on the cap-top and the bandless cap, the pen dates from c1933. The material is identified in the colour swatches as MA-52-54-02, however this discovery places it nearly 20 years earlier than the implied 1952 introduction date, around the same time as the red candle flame MA-34-54-01. Unfortunately it is not easy to change the captions in the image files, so I have added a note of explanation to the foot of the Marble colour swatches page.

On page 75 of FYOTD I pictured an unusual black Dinkie 550 that carried an imprint for the later Dinkie 560. I recently had the chance to examine some of the Dinkies remaining in Henry Simpole's collection. Among them was a 550, identical to the pen pictured in the book, but this one carried the standard Dinkie 550 imprint. Unfortunately, this does nothing to clear up the confusion as to the position of this pen in the history of Conway Stewart!

Once I started selling off my collection, I swore that I would not buy any more Dinkies, however.....

On p10 of FYOTD, I mentioned that the 525T was apparently the only Dinkie to be produced in tan vulcanite, and that only a couple of examples of this model were known. Then, out of the blue during the Covid-19 lockdown, a 526T suddenly appeared, and of course I had to acquire it. Let us just say it had had a hard life until now, but a little bit of work has made it look lovely once more, and a great companion for the 525T! Whereas the 525T was almost certainly made for the North American market, the 526T is most likely to have been made for the home British market.

The imprint is hard to read unless you get the light to hit it perfectly, so I thank Barry Rose for the unusually angled picture of the imprint below, and also for finding this very rare pen for me!

Doug Wilson has been researching the Conway Stewart 'Companion Sets' which were exclusively available to the Australian market. He has now confirmed that the number 33 Companion Set included a 550 Dinkie pen and a 25 pencil.

The interesting leaflet shown right dates from c1960/61 and it features all the sets in the Companion range (with the exception of 44 and 55). The price of the 33 set is shown as 60 Australian Shillings, which of course differed in value compared with the UK Shillings of the time.

Most of the boxes for these sets (including the 33) are in plain cream, with a red base. They feature a distinctive 'Conway Stewart London' red logo on the top, which also appears to be exclusive to the Australian market. The set number is marked in large red numbers on the end of the box lid.

Many thanks to Doug for allowing me to use the pictures of the leaflet and his 33 set (left and below). You can enlarge any of the pictures by clicking on them. 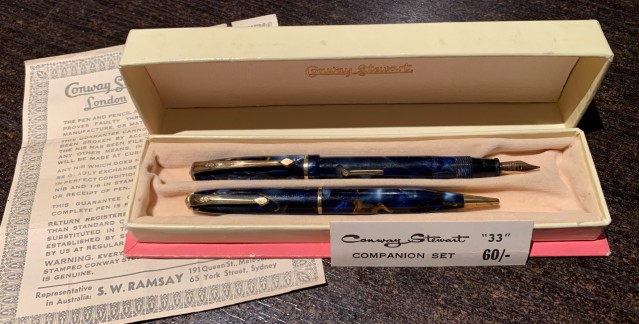