Fountain Pens for the Million

The History of Conway Stewart

The book details the history of Conway Stewart over 10 chapters in chronological order from their founding in 1905 up to their liquidation in 1975 until, after several abortive attempts at a revival, the company re-surfaced in 1994.

There are more than 700 'actual size' colour images of pens, stylos and pencils (including some rare prototypes), and other images of associated items, advertising and leaflets. There are also personal reminiscences from relatives of the founders of the company, as well as from former employees and directors. The appendices include lists of the known Conway Stewart model numbers, details of the various Dinkie models over the 50 years they were manufactured, and a comprehensive table showing the Le Tigre models made by Conway Stewart for the Belgian market.

Published by Shelley and Peacock, 2010

Published by Shelley and Peacock, 2020

However, copies of the paperback are still available from the manufacturer of modern Conway Stewart pens at 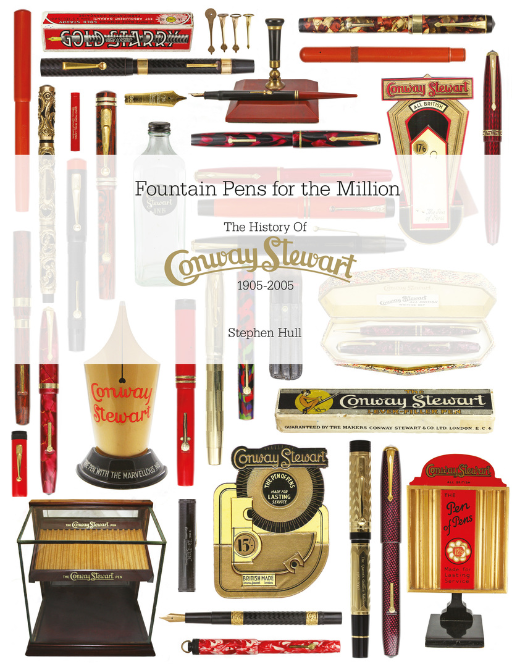 Published by Shelley and Peacock, 2020

This ebook is ONLY suitable for Apple devices (ipad or Mac computer) in conjunction with the latest version of the Apple Books app, which is available for free download from the App Store. The book will not display properly on other devices or using different reader apps.

Before ordering, please review the

to ensure you have a suitable system on which to install the book.

including the e-mail address on which you want to receive the transfer link. You will then receive a Paypal invoice for the purchase.

Once the Paypal payment has been received, a download link for the epub file (size approximately 145Mb) will be sent from WeTransfer to the e-mail address you have specified.