Steve will be taking tables at many of the shows organised by UK Pen Shows in 2017, including the South West (Bristol, 5th February), Eastern (Cambridge, 12th March) and Midland (Lichfield, 25th June). He will have copies of all his books available for sale and will be pleased to discuss visitors' collecting interests, especially relating to English-made fountain pens.

Steve's friend and book designer Andy Russell also has some projects of his own slowly taking shape. The first of these books will be a detailed history of the Conway Stewart Dinkie, one of the most famous pens ever produced by this famous English company, and quite possibly the first pen in the world ever to be offered in a full range of colours. The beauty of these little pens should ensure the book will be not only an ideal 'coffee table' title but also the perfect reference book for the serious collector. As well as full details and pictures of all the known Dinkie and Dinkie Major models, the book will feature a comprehensive set of around 100 colour swatches of all the different casein materials offered by Conway Stewart over the years, and a code will be assigned to each of these materials to help future collectors correctly describe the colours of their pens.

As Steve first announced this title on the back cover of TEFPI back in 2011 (with a due date of 2012/2013) it would be rash to make any firm promises as to availability! However, work on the photography and layout has now begun, and it is now hoped that this will be available for sale at the same time as the Swan Pen book, in 2018.

Steve is progressing well with his next magnum opus and hopes it will be available in time for LWES 2018.

In the meantime, he'd be pleased to hear from anyone who has any very rare or unusual English-made Mabie Todd products, including pens, stylos and ephemera, and who would be willing to have photographs of the items (with acknowledgement) featured in the book. He would be particularly interested in

Steve's book was successfully launched at LWES on 2nd October, with many copies sold. The picture shows Steve (right), with Andy Russell (book and website designer) and Joy Madgwick, who helped Steve with his research into De La Rue's wartime temporary head office at Hayward's Heath. The picture was taken by Steve's wife Kate, who also helped with book sales throughout the day. 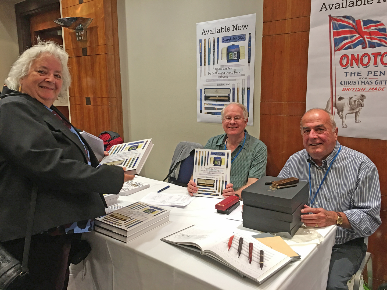 A new 'Links' section has been added to the website. Further developments in the coming months will include a 'Pens for Sale' section, where Steve will make some of the pens and other items from the Onoto book available for purchase, and a 'New Finds' section where any additional information and new items that have come to light since the book went to print in July 2016 will be added.

The Onoto book is ready for launch at the London Writing Equipment Show to be held at the Holiday Inn, Bloomsbury, London WC1N 1HT on October 2nd 2016. There will be plenty of copies available to purchase at the show, where Steve will be happy to sign books with a personalised message if requested. The price will be £70.

Those who have reserved Limited Editions will be contacted before the show to arrange payment and postage or collection from the show. All 54 Limited Editions have now been sold, subject to any last-minute cancellations.

Work is now underway on the next in the series of Steve's books.

It is hoped that this will be published in 2019.