Since completing 'Onoto the Pen', Steve has acquired a few more interesting items that will be of interest to readers. These are featured below, along with the relevant page references from the book where appropriate. Click on any image to magnify.

Plunger-filling ink pencil with unusual ink feeding mechanism and with 'Onoto the Pen' barrel imprint, suggesting that it may be a prototype model, c1920 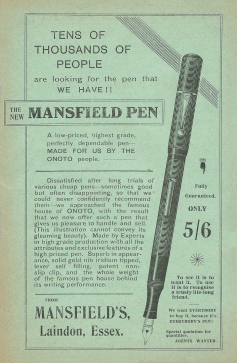 Part of a six-page leaflet, c1923, showing a De La Rue Everybody's lever-filler as the 'new Mansfield pen',
"made for us by the Onoto people". The pen featured is the same as that shown on page 92, but has a Pat 1922 clip. Mansfield's (established 1905) of Laindon, Essex appear to have specialised in calico streamers, signature rubber stamps and, exclusively for Salvation Army Officers, a huge range of hand-written and hand-painted campaign posters

The Knight Rider lever-filler, c1935. This pen has the same barrel imprint (+ B6.) as the Knight Rider button-fillers on page 209, and is identical in style and size to the Pelican and Albion pens on page 185

The following are almost certainly prototypes or pre-production pens (all with 14ct nibs, mostly 3 or 3/ST), in some cases possibly used as samples by De La Rue representatives to gauge opinions of major Onoto retailers, and are similar to (and of the same era, c1952) as those pens on page 293

Lever-filler with semi-hooded nib (and styled section as the next pen), slip-cap and dark green barrel with matching lever

Lever-filler with semi-hooded nib, styled section, slip-cap and black barrel with matching lever (similar to those used in Mabie Todd Swan Minors of the early 1930s)

Twist-piston-filler with hooded nib, similar to Onoto K4, but with wider cap band 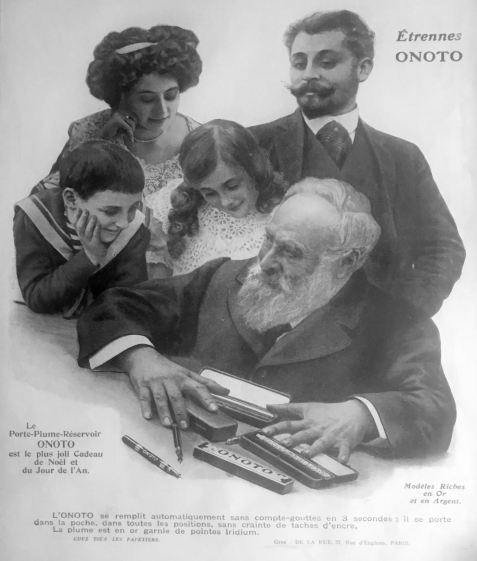 Bernard Prosser has recently acquired a number of large early French Onoto advertisements. This one dates from 1908, and it is reproduced here with his permission. See Onoto the Pen p48 for other examples of French advertising from this era